There comes a time in a young man's life when he must leave the nest and find this place in the world. Some become duty bound knights of the church, some find their calling in endless study of the magical arts, others never find what they're looking for at all. Today four old friends and alumni of the Valewood Hallow Lamp Lighters Guild return home to uphold a solemn oath made many years ago.

Luther Siegfried is a scholar and adventurer who founded the Lamp Lighters guild 38 years go in the small town of Valewood Hallow. He is also a veteran of the Northern War and has been on many adventures in his day. Now in his elder years, Luther has set his sights on scholarly studies and the collection of antiquities. He owns and operates a rare antiquities shop in the Valewood Hallow. Needless to say in a town like Valewood Hallow, a rare antiquities shop is not a popular fixture, but word of his treasures have blanketed Lyre and many interested collectors and scholars visit to view and sometimes purchase his goods. Luther is a well liked man in town, but typically keeps to himself and rarely frequents the local pubs and eateries preferring to stay in with his studies.

The Lamp Lighters Guild is an organization founded by Luther as a rite of passage to adulthood of many of the Children of Valewood Hallow. The Lamplighters guild is a regimented group of youngsters from age 8 to 16 who, at dust, make rounds in the town lighting all the street lamps. When it is said that the guild is regimented, the process in which each lamp is lit is almost ceremonial. The theory behind this is to teach young people discipline, responsibility and a sense of teamwork to further the common goals of a community. The Guild is a brotherhood and those who are and were members are a family and feel a strong sense of honor and loyalty to one another.

The Oath of Brotherhood

After graduating the Lamp Lighters Guild at age 16, the group of friends made a pact to return to Valewood Hallow if any one of them were in need of help.  Master Siegfried discussed the oath with them and assisted them by giving each of them a light blue stone egg with runic etchings around the outside.  When it is nessicary to contact one another, the egg is placed before you and you must utter the words "Aiya Nossë Valaina", (Elven for "Hail, Brothers of the Guild"). The egg will then hatch a baby bird which will grow to full adulthood in a few moments.  Speak a short message into the ear of the bird and it will then seek out each member of the pact and deliver the message.  At which time it will be freed into the wild to live its own life. 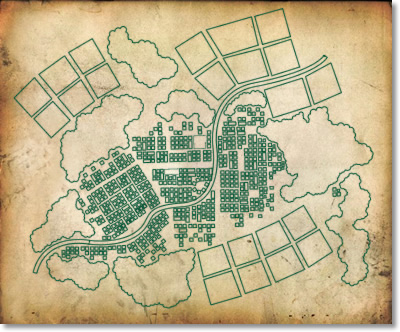 Map of Valewood Hallow
Click For Enlarged PDF
Valewood Hallow is a fairly small town nestled between the largely unexplored Ashenwood Forest and the Grassy Vale. The Cedarhall River run directly though the town providing many of the towns grain mills and brewers power for their waterwheels. The town's income is mainly do to farming and logging. Valewood Hallow was Initially founded as a way point between Irongate and Black Rock but has since become the crossroads between the fore mentioned cities and the Ashenwood Pass though the Ashenwood Forest which leads north past the old St Milo Keep to Cowyars End. St. Milo Keep at one time was the grand keep of the northern borders of Lyre until Lyre expanded its Borders northward.

The town is protected by a team of skilled Constables lead by High Constable Cornelius Heart. He employs 4 other constable and 1 prospect constable. The town also has an auxiliary militia made of of able men that take shifts doing nightly rounds in the streets at night on foot while others ride the perimeter of the town on horseback. The militia has a membership of 16 active men and another 14 on reserve. This militia was initially set up when a rising amount of Kobolts and Gnolls began to boldly come closer to the edge of Ashenwood and steal livestock.

Valewood Hallow was also made famous for being the home of the Red Basilisk Brewery which produces the kingdoms strongest ale. "One sip put Bahamut to one knee."

I'm sorry, but we no longer support this web browser. Please upgrade your browser or install Chrome or Firefox to enjoy the full functionality of this site.